The media world has changed a lot over the past few decades due to the various technological developments across the board that have been integrated into media vectors. Traditional billboards and signage are rapidly being phased out and being replaced by full-colour LED displays that come in a range of different screen shapes, sizes and features. It has come to a point that LED has become a primary vector for media advertising from a variety of perspectives.

The driving force behind the rapid development of LED technology was not due to any phenomenon, but due to purposeful economic objectives that saw the optimal use of technological developments that delivered tangible results. It did not take long for LED technology to overwhelm street lamps, the ordinary home and replace billboards, television and most other types of electronic display devices. This was due to the enormous and unmatchable versatility and flexibility that LED display products and LED lighting lamps gave the world. In essence, the entire LED industry paved the way to enhance entertainment, sports and media events and marketing initiatives for just about everything. Almost all latest LED screens that come into production are made for specific purposes that have allowed the entire realm of media promotions reach unprecedented effectiveness that has side-lined television, newspapers and other media at a relatively lower price. This has rendered LED displays in all of its forms an incomparable advantage.

From giant LED screens that act as billboards to flexible LED screens that could be wrapped around columns, fitted on cured arcs, to LEDs that can be fitted to floors and ceilings and interactive LEDs that have AI (Artificial Intelligence) integrated to them. More recently even guardrails have become ‘media space’ due to the versatility and flexibility that LED displays to offer. These adhesive guardrail LED screens have the potential to convert dull empty spaces into bright attractive media ‘spots’ that can attract attention effectively. 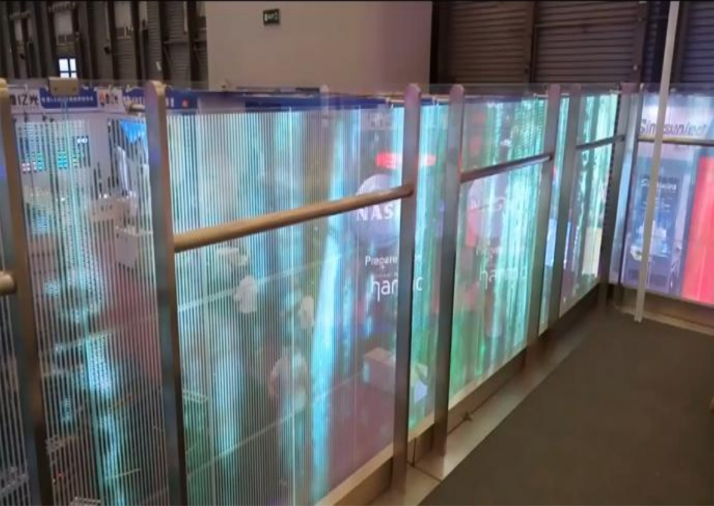 LED guardrail screens are unique and quite impressive as they are from a wide variety of perspectives. These guardrail LED products are constructed in a manner that makes it highly transparent which renders the inner components such as its power circuit invisible from viewers. In general, the Adhesive Guardrail LED Screen according to LED industry leaders such as Street Communication boasts three primary features which are robustness, cost-effectiveness, safety, easy maintenance and last but not least beauty. This gives the guardrail screen a wide spectrum when it comes to application. The fact that these Adhesive Guardrail LED screens are transparent makes them perfect to be installed on guardrails or walls that are made of a transparent material such as glass.
The fact that most buildings or architecture in modern times are made of transparent material, the guardrail adhesive LED screen offers the perfect solution for airports, overhead highways, high-speed railway stations, shopping malls, building facades at upper levels or even subway stations. The guardrail screen when installing in the right location does not only add content that is supported by technology, vibrant colours and inter-changeability, but it also enhances the aesthetics of the structures that it is fitted on making it possible for messages to reach wider audiences. This enhances ROIs (Rate of Return on Investments) because when more people are made aware of promotions (which by any measure is an investment), the rate of success for new product launches; events, festival or celebrations increase significantly.

Apart from the adhesive Guardrail LED screen is a versatile product and adapted for a variety of media scenarios that range from shops, subway stations, malls, stadiums and transportation guardrails to spread information and enhance the ambience and aesthetics of the space that it occupies. The adhesive guardrail screen has a variety of advantages that among others include an easy installation process that does not require much rework of the installation surfaces and thus does not cause damage to the original structure or architecture of the installation. The adhesive guardrail screen is also waterproof, fireproof and is manufactured with anti-collision features (shockproof/ bump-proof). The screens which are also highly transparent as mentioned earlier also comes with PCB technology which allows it to be constructed to be ultra-thin and the technology of pc which also makes it transparent enough not to disrupt background aesthetics. The adhesive LED screen technology that has been incorporated to guardrail LED screens that are also ultra-thin, ultra-light and highly transparent make them the perfect choice for not just enhancing dull and eventless guardrails, but also towards monetising them for businesses that ‘depend on space’ to enhance revenue streams.

Guardrails are often the target of most major brands as they make up the façade and are an integral part of a building’s architecture. Due to this reason, maintaining the integrity of these guardrails and simultaneously ensuring that they are attractive would be a positive element for venues. The adhesive guardrail LED screens as mentioned above are, ultra-thin, ultra-light/ superlight, highly transparent, easy to install and easy to maintain making them the perfect solution for guardrails at just about any location. According to the LED industry maestros Street Communication, the adhesive transparent guardrail LED screens are among the most robust and cost-effective LED products that are available in the market. They are considered to be cost-effective because these products are also waterproof, shockproof and UV proof makes them perfect for both outdoor and indoor applications. Companies such as Street Communication consider these products as among their most ‘in demand’ products based on the rapid movement of this particular product from their inventory. Adhesive guardrail LED screens according to a spokesperson from Street Communication is set to replace most outdoor and indoor media installation within the next few years.